Have a minor pest issue?  If it can be resolved with an easily available product we recommend it here.  These recommended products are for customers to solve issues they have at their property. We have organized a list of some common products at this Amazon page to make them easy to find.  Follow this link to our recommended products page if a technician referred to a product and you are having trouble finding it. For example, Plink for disposal cleaning is listed here to reduce fruit flies.  Other effective and often needed products include nets to hang under a bird feeder to catch seed and keep it off the ground. Snow can help rodent control two ways-both related to tracking. Not a lot of benefits from snow fall, except skiing, and tracking animals. Two ways to use snow for rodent control is first identifying the type of rodent and second where it is going. These rat tracks are near the back of a dumpster. The tracks lead between the ornamental grasses and the stockade fence around the dumpster.

First, look at the size of the track. This photo is clearly a rat because of the size of the tracks. These tracks are close to an inch across, where a mouse track is a third of the size or 3/8″ of an inch. Next, look for a tail, here you can see the clear line of a tail dragging in the snow. Mice tail marks rarely show up as clearly. Mice tend to spring through the snow, leading to large lines behind the rear legs, similar to rabbit tracks. The path led directly to the burrows hidden beneath a plant at the edge of the fence visible in the next photo. After fresh snow is the best time to look around the outside of any account that has rodent issues to follow those tracks directly to the entry points or burrow system.

Tracks are like arrows pointing to where to look.  Start by planning to look after a snow event.  For instance, the best type of tracking snow is a lighter snowfall event with dry snow.  Any snow will do to tell direction the animal is moving and where it is moving to and from. This information is invaluable to helping discover patterns of activity. In the case of the rat tracks above the tracks went right by an existing rodent bait station.

Next, look for water sources near the tracks. Rats need a water source every day, where mice do not because they get water from the food they eat. With a burrow system there will be tracks to a water source, unless the burrow connects to an underground water source like a sewer.

Mice tracks around the outside of a house can be used to find entry points into the home.  First look at the snow around the foundation wall to see where tracks are evident.  These tracks will cluster near the point the mouse is climbing the foundation wall.  Above the track cluster will be an entry point.  Finally, look for tracks that disappear under attached  parts of the house you cannot get under.  These areas will need special attention or creativity.  Examples are low decks, porches or attached sheds without foundations.

Take advantage of fresh fallen snow to look for animal tracks.  Inside an attic or basement, use dust like snow to find tracks to use as arrows of activity.  Then follow those tracks to a successful rodent control plan. Set up your inspection today. Happy new years resolutions! Clean out the clutter is a great one.  Reduce pest populations in your home by cleaning and organizing your basement and attics. First, get organized with racks and plastic bins to get what you have where you need it. Second, donate, sell or discard everything you do not need or use. Finally and most important of all storing items properly makes it easy to preserve your stuff and make it hard on pests at the same time.

When storing items in basements or attics do not use cardboard boxes. The starches in the glues and the cardboard itself is food for a variety of insects including silverfish and booklice. In basements store items away from foundation walls and off the floor to let air circulate. Keeping stored items and the walls and floors as dry as possible will reduce pest issue. Most pest issues start with moisture and shelter and take off from there.  In addition, a basement or crawl space has plenty of moisture by virtue of being below grade and your stored items bring food and shelter into the equation resulting in a pest paradise.

In conclusion, pests need food and shelter and you can remove those resources by following the three tips listed above:  Organize what you will keep, get rid of what you do not need and will never use, and store everything properly to keep pests at bay. Patience is the first reason to use a wildlife camera.  A wildlife camera has a motion sensor to take a picture or video when motion is detected. No human could sit in place to monitor a location for pest activity.  However, the camera is purpose built to sit in place for hours and days until the information on the rodents movements are captured.  For example, the shot of the rat running the sewer line up the balloon wall construction here in Boston is taken by the camera at 1:05 am.

Access is the second reason. The camera is placed into and retrieves images from spaces that are not accessible to you. The Moultrie camera you see here is around the width of a Sharpie marker.    The footage of the rat entering and leaving this pipe chase showed how to place traps for maximum effectiveness.  Above all a camera had to fit on the sill of the foundation, over a pipe, in an area a human head could not get in.

In conclusion, wildlife cameras should be part of your inspection arsenal to effectively target your rodent control efforts. Some minor pest issues are easily resolved with a ready to use pest control product.   We have organized a list of common products to solve pest problems at the source at this Amazon page to make them easy to find.  Follow this link to our recommended products page if a technician referred a product and you are having trouble finding it.  In addition, you use this list to find products based on your own needs.  The pest control products listed are items for fly control, rodent control and for moisture control.

Second, rodent control items listed include lighted mirrors to find rodent entry points and devices to reduce rodent food sources.  If you feed birds you will need a net to hang under your bird feeder to catch falling seed and keep it off the ground.  If bird seed is allowed to fall to the ground under a feeder mice and rats will have a handy food source to grow the population right outside your home.  Use the inspection mirror to inspect your foundation for openings that are not visible from a standing vantage point.  In other words, the mirror lets you see your home like a mouse crawling up the foundation sees it.

Third, moisture sensors are listed because moisture a leading cause of pest issues.  Every home should have multiple moisture and humidity sensors.  A basement humidity and moisture meter is an essential step to detecting basement or crawl space moisture problems.  If elevated humidity levels exist, then steps must be taken to remove basement humidity and moisture. Follow this link to our page with information on basement and crawl space dehumidifiers.  Moisture meters are important to finding sources of moisture in wood or structural materials.  For example moist wood in wood door frames indicates improper weather stripping or flashing around the door causing the door to get wet.  Wet wood is no good. Left alone wet wood will lead to pest issues including but not limited to ants, cockroaches and termites.

Let us know if you have ideas for products that may help other customers manage pest problems.

To increase the effectiveness of your rodent trapping, consider using a cardboard box, such as a shoebox, or a commercial trap box.  Always use baited traps in pairs, set with the trigger against the edge. Pair of mouse snap traps in a cardboard box

1) Always place mouse traps in pairs unless there is no room. When the mouse jumps the first trap it will caught in the second.

2) Place bait in the bait tray, visible here just in front of the hinge on the yellow trigger.

3) Place traps with the trigger (the yellow or metal on Victor traps) against the edge of the wall or runway. Rodent use their vibrissae or whiskers to feel along edges and traps placed against an edge are much more attractive. Don’t want to hire a professional, but you want some advice and materials? Our 2-4-6 Mouse Trap Kit includes 12 baited snap traps paired in 6 cardboard mouse trap boxes, plus 4 feet of copper for exclusion around your home and 2 pairs of biodegradable nitrile gloves, for handling dead rodents.

Go around the outside of your home with a mirror and flashlight and fill the openings that you locate.  Use scissors to cut copper to appropriate size and fill holes from the outside of your home.  Do not use copper against other metals, like iron gas lines.  Mice will go under doors that don’t have tight fitting sweeps and seals.  In addition, if you have a bulkhead you need a weather tight door with a threshold at the bottom of the bulkhead stairs.  The bulkhead door is not mouse proof.  Bulkheads and garages are two of the most common mouse entry points.  Any point where two different foundation meets, like where an addition is attached to an existing home, if also a common entry location. Supplies for trapping and exclusion of mice

The traps are set by pulling back the hammer and securing it under the straight hooked bar by placing the straight hooked bar over the hammer and under the plastic (or metal) catch. Hold the trap by the sides to avoid catching your finger in the trap. You have to raise the trigger slightly off the wood to have the bar secure in the catch.  The F side of the trigger is for a firm setting, try to use the S side which is the soft setting to increase the number of juveniles you catch.  Always use snap traps in pairs with the trigger against the wall. Don’t give mice and rats an open door. A door sweep is a flexible strip installed at the bottom of the door.  It is there to close the gap between the closed door and threshold.  A missing or broken door sweep is an open door to insects, mice, and rats.  Rodents and insects use that open door to enter your property.  Door sweeps often are missing, damaged, or installed incorrectly.  The problems with door sweeps are not noticed because they are below your lin of sight.  That allows rodents and insects an easy entry.  A compromised sweep also allows conditioned (heated or cooled) air an easy exit.

Inspect your doors today.  Replace missing and damaged sweeps.  Install high quality brush style sweeps flush to the floor on the door stop side of the door.  To clarify, the door stop is the part on the door frame a closed door shuts against. 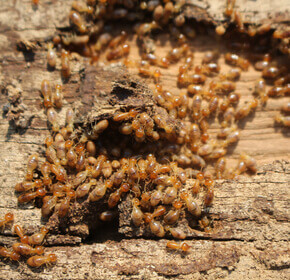